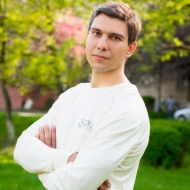 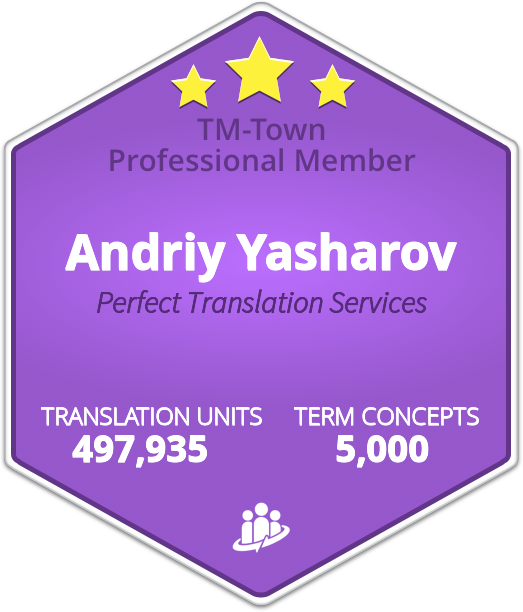 The above rates are my best ones ever. I know that every project is different and there is no such thing as a "one-fits-all" translation rate. I mean that a discount is possible and can be considered under certain circumstances. There are many factors that affect translation rates: complexity of a source text, file format, turnaround time, your budget expectations, etc. Please, contact me and I'll be happy to give you an exact quote.

Ever since I remember myself, I’ve always wanted to know more and understand more than others. It wasn’t long before I realized that knowing more would give me lots of advantage in all areas of life. For me, one of the ways to become smarter was to read more, and then later I realized that I would succeed in personal development even more if I knew English. Why English? Well, to be honest, I’ve always liked English very much, and it has been a very popular and widespread language in the world for a long time. Back then I knew that if I could read English books in the original and understand what other people said it would improve my grades in school, make me more confident in general and in the end it would contribute to my career. Even then, being a kid, I knew that languages were my future. Therefore, when I was a seven-year-old kid, my mother took me to an English teacher who agreed to give me classes two times a week. By the fifth grade, I was the best in my English class in school. But then, another factor affected my linguistic abilities. It was sports that I also enjoyed. I was an avid swimmer and later made efforts to be a great judo wrestler. The sports had a profound influence on my physical development but at the same time spoilt my knowledge of English. Because of daily sports activity, I couldn’t spare as much time on English and other studies as I had done before and consequently, I completely forgot English to such a degree that I could no longer speak, read, write and understand the English language. Another strong wave of interest came rolling in when I was sixteen and in the tenth grade. The desire to study was so intense that I used to spend between 5 and 6 hours per day every day studying English and biology which is another topic that I like very much. Again I found an English teacher who was happy to teach me, and as a matter of fact, he did an excellent job because it was less than three months later that I could speak, read, write and understand English, which very much surprised my teachers and friends. Just imagine, at the end of May, just before the school summer holidays, I couldn’t read a single sentence in English without making a mistake in every word. I didn’t know anything at all, but in September at the start of a new academic year, I was the best student in English in the entire school. It was a shock for my teachers, a pleasant one to be exact, but they couldn’t believe their eyes. That is what hours of daily work and perseverance can do. After leaving school in 1997, I entered the biological faculty of Donetsk National University. I wanted to study Romano-Germanic philology, but as fate willed, I found myself studying biology instead of translation. Anyway, I started studying human physiology, and I must admit I liked it and life sciences did not become an obstacle on my way to becoming a translator. On the contrary, they strengthened my skills and gave me more knowledge, confidence, and advantage over my peers at the Romano-Germanic faculty who were pure linguists without any particular specialization. When I was in my second year at the biological department, I decided that I needed a diploma in translation. I was thinking about my career of a translator, so I needed a second higher education. With this idea in mind, I entered the faculty of optional and additional professions (funny name, isn’t it?) and two years later, even still being a student of the biological department I obtained a diploma in English translation. This turn of fate determined that after graduation from the University in 2002 I was able to translate medical texts, scientific articles on life sciences, general texts, interpret at meetings and so on. I was fully prepared for many translation challenges. But I didn’t become a professional translator straight after graduation. It took years to become what I am now. In 2002 I started to work as a biology teacher at a regular secondary school and spent three years and a half teaching biology and educating children. In 2004 I began combining two jobs — a biology teacher and a translator at a language center that gave a start to my professional translation career. The language center in Donetsk (Ukraine) was the place where I learned how to translate in the medical field, how to manage projects, create dictionaries and glossaries. Three years later, in 2007 I quit the center and decided to explore the area of heavy industry. So I went to work in the translation department of Donetsk metallurgical plant. There I learned about steel making, electric arc furnaces, metal scrap, steel grades, financial contracts, tenders and so on. A year later, in 2008 I realized that I was ready to launch my freelance career. However, in 2011 I decided to expand my medical specialization and include a pharmaceutical aspect. Therefore, I was employed by a local pharmaceutical plant in Donetsk to translate patents, work instructions, documents on chemistry, pharmaceutical production, GMP (good manufacturing practice), quality assurance and quality control. I also interpreted during meetings and audits. After such a broad experience now I am able to translate case report forms, clinical trial protocols, informed consent forms, clinical trial agreements, IVRS user guides, investigator's brochures, clinical research reports, periodic safety update reports, patient information leaflets, standard operating procedures, package inserts and labels, summary of product characteristics, quality of life questionnaires, material safety data sheets, operation manuals for analytical instruments, marketing and advertising materials, laboratory test protocols, scientific articles, analytical procedures, etc. So, this is my story. Since 2014 I’ve been running my freelance business as a translator with several specializations strengthened by a real work experience.