Translators often pride themselves that they are translating the work of their clients irrespective of their own values and perceptions. But is it really possible to deliver a translation without taking other values into consideration? Two recent projects I did made me think about how value-free a translation actually can be.

It is not a surprise that every person has its own standards and values. Our cultural, religion and educational background determines how we perceive the world around us. As we grow older we sometimes give up the convictions with which we grew up, sometimes even exchanging them for totally different beliefs or no belief at all. But whether we stick to the values we learned from home or to new values we have picked up over time, we still have a basis that forms the foundation for how we think and act. These values are not always visible, but they still guide us when we need to take decisions. On a personal level they can influence our decision whether to go to a specific event or not, while on a professional level they can influence our decisions about a particular client or job. So we all have a normative framework that guides us in our daily lives. And that is perfectly fine: having an intrinsic motivation to uphold our personal values and beliefs makes us able to take on work that fits our normative framework. If we can complete translation jobs without conscientious objections we are better able to handle particular jobs and to deliver the quality we want to deliver– and that clients demand.

So our specific personal beliefs guide us in how we deal with our job. However, they also reach a much deeper level. Our moral convictions make us stick to a particular vocabulary – influencing the words we use and those we don’t. Some people won’t use curses, while others are using expletives in almost every single sentence. For Christians, using the name ‘Jesus’ all the time is blasphemous, but people who are not believers can use His name all time without minding what they say. In the same way, people who have had cancer or another severe disease will not use that word as a swear word while others will use it as an adjective in each or every sentence. While this often happens very unconsciously, we all deal with it.
Our moral convictions however, influence our language at an even deeper personal level. Sometimes we even avoid words that have no obvious meaning than to us personally. There are people out there who won’t use the Dutch word ‘scheppen’ (‘to create’) because they believe in an almighty Creator, who was the only one to create. They use other variants instead (‘maken’ for instance), which has (almost) the same meaning but lacks the emotional power that they personal relate to other words.

Standards and values in source texts

When these moral convictions boil down to the level of words, they will certainly influence the works of a translator. Translators, however, need to deal with another aspect of standards and values as well: that of the origin of the source text. Indeed what has an emotional or sensitive meaning for the author of a text, can have a whole different meaning for the translator. And even if a source text has no ‘ties’ whatsoever –there is still a chance that the translator ends up translating a sentence or a particular word in a different fashion or with a slightly different meaning than the author originally intended. While this is not often the case with general texts or business texts, it can occur in legal translations and other specializations.

To me the case became clear once more when I was asked to do an urgent translation last week. A client asked me to translate the announcement of President Trump on the attack on Syria, the night of Friday, the 13th of April. Being a lover of (and graduate) in Politics I decided to take on the task and translate the integral statement of the President of the United States. Reading the announcement made clear which position Trump took on the attack with chemical weapons in the weekend before. The president carefully chose to use terms like ‘slaughter’, ‘massacre’, ‘evil and the despicable attack’ and ‘gruesome’. While the overall message provided no ambiguity as to the severity of the situation in Syria and the legitimacy of the United States to attack some targets, it left space for interpretation in The Netherlands. Many words could be translated into at least two variants, some having a more emotional impact than others. Which should I have chosen? Should ‘massacre’ be translated as ‘bloedbad’ (severe) or as ‘massamoord’ (grave)? And should I translate ‘anguish’ as ‘leed’ (severe) or as ‘ellende’ (grave)? The choices led to several dilemmas and questions. Did President Trump always mean the most grave form of a certain word? And what would happen if I chose a less severe variant? Would it weaken Trump’s message or make his presentation less dramatic? It led to several decisions in an announcement of roughly 800 words. And while I am pleased with the resulting translation, I would bet that people with different backgrounds and beliefs would be able to produce a translation with a different emotional load. 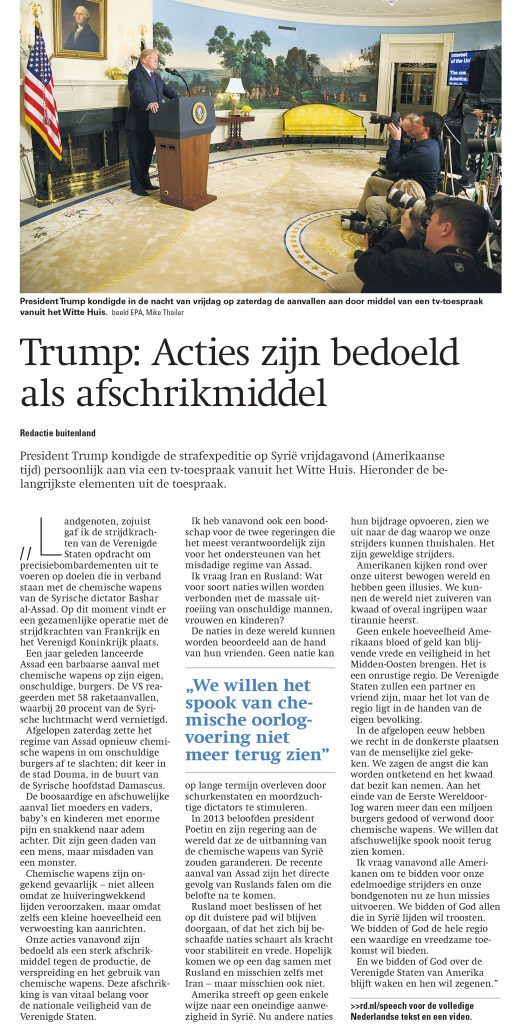 By the way, you can read the translation here.

Similar situations occur time and time again in the world of political translations. When I translated part of the autobiography of Bernie Sanders, the former independent candidate for the US presidency, I had to take similar decisions all the time. No matter my own standards and values, I had to choose particular translations for terms he used. But with every term having its own political dimensions, it is hard to produce a translation that exactly reflects the intended meaning. Even worse, it actually offers options to weaken or strengthen the message, letting politicians and other leaders say what they actually did not say.

When US minister Tillerson called his boss a ‘moron’, Dutch media used different translations. De Telegraaf translated it as ‘dwaas’, while Trouw chose ‘idioot’ and NOS opted for ‘debiel’. Each news outlet having its own political stance and audience, they each chose a translation that fit their own framework – leaving open what was actually meant when Tillerson used the M-word.

This, however, is a situation that will probably never change. ‘Sources’ use their own convictions to convey their message, ‘intermediaries’ (the translators) do their utmost to deliver the best possible translation and ‘targets’ (the audience) interpret it in their own way – whether enabled by the intermediaries or not. The work of translators is invaluable but there is always some kind of value attached to it.