Two weeks ago SDL launched a new version of its flagship product: Trados Studio 2017. I had the honour to test the CAT tool during some beta stages. Now that it is released, I want to share my Trados Studio 2017 review with all translators who are still in doubt about whether or not to invest in a new version of the CAT tool. If you don’t want to read all the ins and outs you might simply jump to my concluding thoughts below.

The introduction of Trados Studio 2017

When SDL announced the introduction of Trados Studio 2017, the announcement basically revolved around two distinct features they were introducing: AdaptiveMT and upLIFT.
upLIFT is sold as a ‘transformational technology’ that consists of two separate subtechnologies: upLIFT Fragment Recall and upLIFT Fuzzy Repair. When there is no TM match for a certain segment, Trados Studio 2017 automatically searches for sub-segment ‘fragments’ from previously translated segments and introduces them to you. This method has two benefits: first you can benefit from terms in your TM that are not obvious because they are not full matches and therefore often hidden in the TM. Second, you can easily add them to your translation thanks to a built-in autosuggestion feature.
The second upLIFT methodology is Fuzzy Repair, which automatically detects and corrects fuzzy matches using TMs, termbases or machine translation content.

Trados Studio 2017 at a first glance

The introduction of Trados Studio 2017 brings, as the tradition goes, some visual improvements with it. One of them is the introduction of a slightly different symbol on the taskbar, which is somewhat darker than in previous versions.
More noteworthy however is the home screen, which introduces a drag and drop screen, where you can drop your files to be translated. If you do that (browsing for files is possible as well), you can choose whether to create a new project or translate the single document. The process proceeds as usual with single files or projects in Trados Studio. When saving the file however, it is saved to a custom Studio directory for dragged and dropped files (not very kind if you are used to using folders for clients and projects like I do). 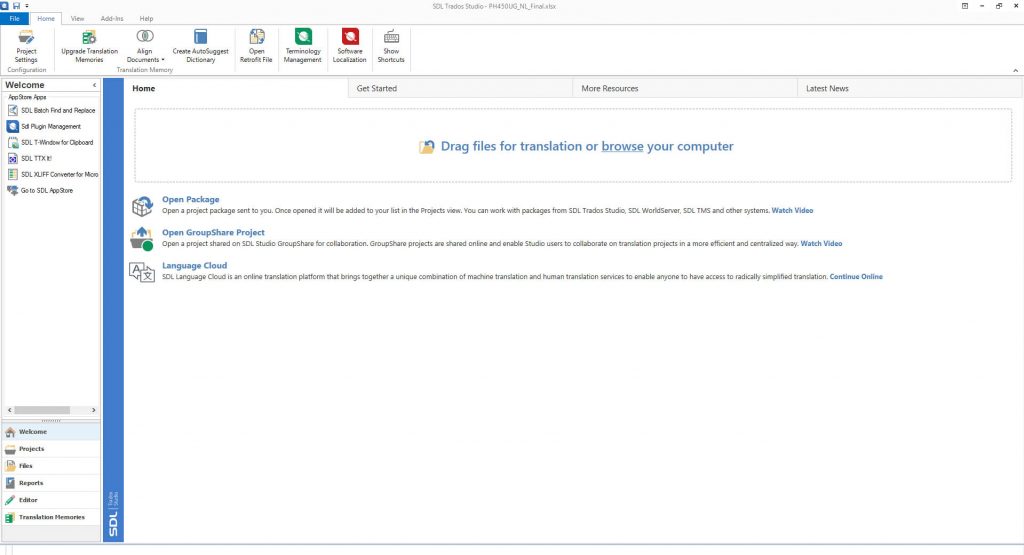 Other visual changes are the renewed flag icons for languages. The redesign is not that important, but it makes Trados Studio 2017 looks somewhat better. 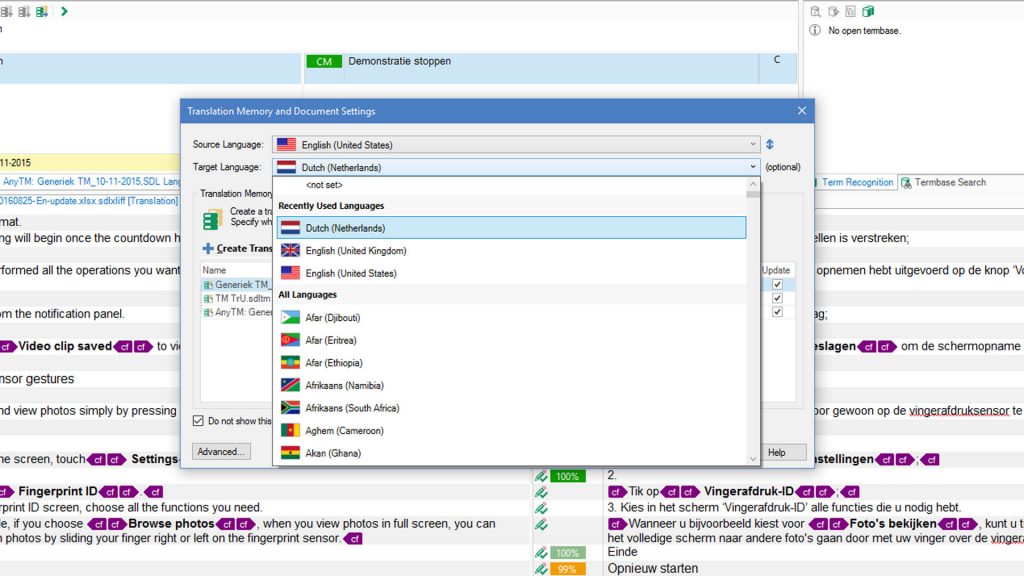 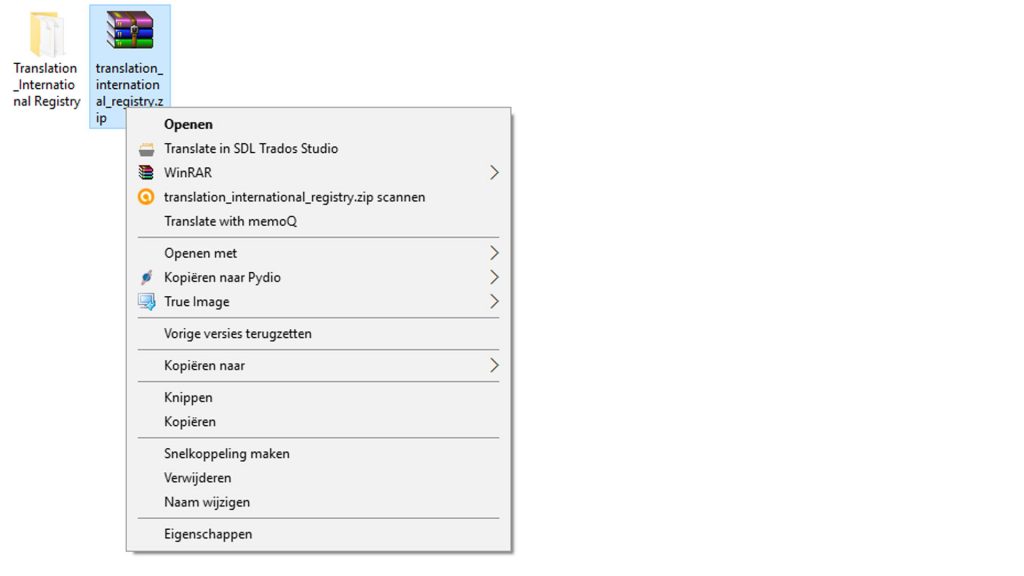 In the wizard there is now an option ‘Reverse the language direction’, which makes it easy to change the source and target languages. If you are used to translating in a single language pair, like me, this feature is not that beneficial. 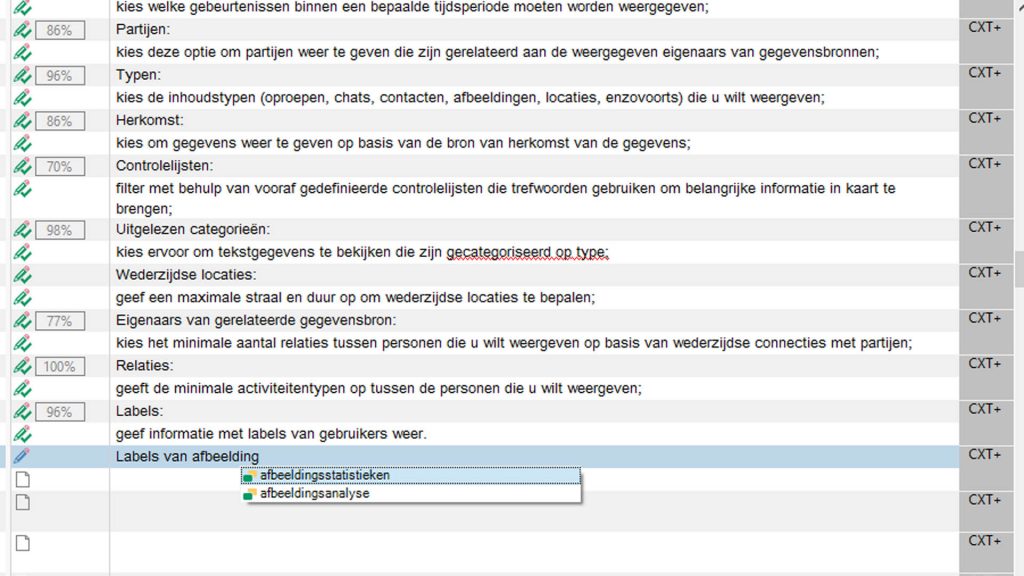 As said, the upLIFT Fragment Recall and upLIFT Fuzzy Repair belong to the most promoted new features in Trados Studio 2017. In the translation practice this Fragment Recall is where a whole short segment contained in a longer one is offered through AutoSuggest. This is a really great feature because if translated without errors you can easily add it to a segment after you have typed the first few letters of the suggestion. If you don’t need a suggestion as a whole, Trados Studio also offers suggestions for parts of the match if you type some letters. The feature enables you to work faster and, if done well, with fewer typos. If you use several translations for a certain term, Trados Studio even offers both translations in an autosuggestion window.
The fragment matches are based on both newer and older translation memories entries but in my experience they are mostly the newer or prominent ones that show up in the new Match Repair window. In her excellent article on upLIFT Fragment Recall Emma Goldsmith shows some examples of TU fragment matches, but in those months that I have been testing and using Trados Studio 2017 I have only used whole TU matches – which is not the optimum usage scenario but still delivers some improvement. (Fragment matches are enabled now as well but I do not expect much improvement of speed/productivity/quality). 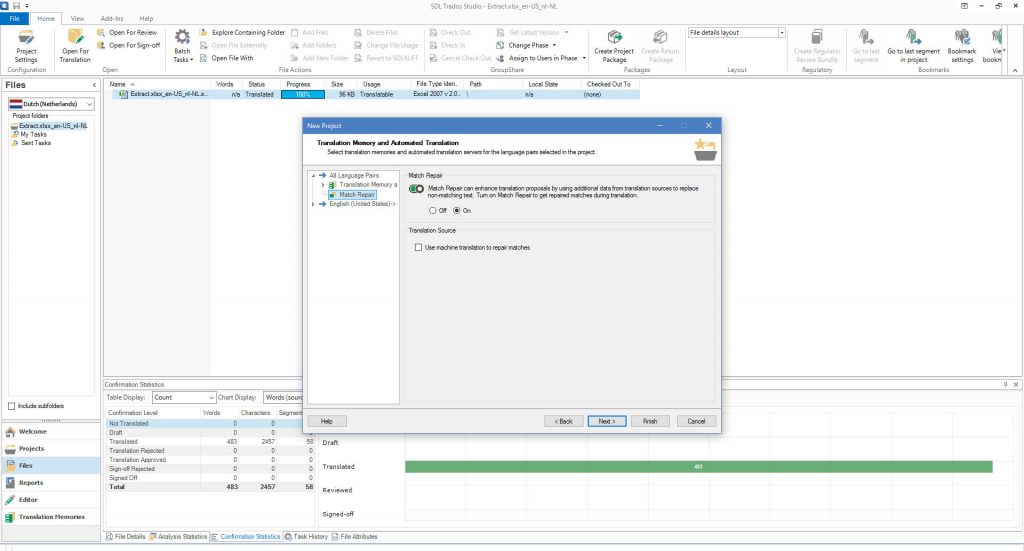 The upLIFT Fuzzy Repair feature is great as well. Trados Studio 2017 has implemented some technology which compares existing TM matches with differences in the source, after which it offers a ‘repaired’ suggestion. This can mean that some text is changed or removed. Repaired matches can be recognized by the coloured bar with a key icon. In the TM pane you can see at a glance what difference the match has compared to the source text, so you can amend the match without much hassle. The repairs by Trados are not always so good, but they often offer a good starting point, enabling you to quickly fix the matches to the real translation.

Trados Studio 2017 is offered with the all-new AdaptiveMT feature. In order to make use of AdaptiveMT you should have a SDL LanguageCloud. In Trados Studio 2017, a new connector is included to connect Studio 2017 to your LanguageCloud account. Each free account offers 400,000 characters each month, 100 AdaptiveMT engines and access to all baseline engines. Once you sign up for LanguageCloud you can simply select a translation engine or create a new Adaptive engine. This engine then offers machine translations for each segment.
It should be noted that you really need to create an AdaptiveMT engine in order to make full use of the AdaptiveMT feature. If you choose to go for a normal baseline engine, you won’t benefit from AdaptiveMT.

In my experience, calculating those translations took considerable time sometimes so using it on the fly did not offer a real improvement in terms of speed, although it did in terms of quality. Compared to my own Slate Desktop engine (I have several but used my “Big Mama” engine which is not quite good; specialized engines are but don’t have the size of LanguageCloud’s engines) the translations were pretty good. An extra advantage was that I did not need to add tags: LanguageCloud offered good suggestions with tags at the right places.

The AdaptiveMT feature did work relatively well. It offered good baseline results at first and afterwards adapted the results of the machine translation according to my style and vocabulary. In most cases I noticed adaptations mainly in terms of particular wordings and less in terms of style. The engine was not flawless in that it sometimes chose a ‘baseline term’ instead of an adapted term that was translated at an earlier stage. Compared to the adaptive MT technology used in Lilt, the technology has some way to go, but it was still usable.
My biggest objection is that the technology is cloud-based. That improves the speed of the engine, but is not preferable when translating sensitive documents or any other documents in which content should not be shared with any party.

The market for CAT tools is highly competitive and continuously evolving. In the last weeks it has been noted several times that Trados Studio 2017 and MemoQ are growing closer. That is a satisfied statement as Trados Studio 2017 introduces the drag and drop and fuzzy repair features that were already present in MemoQ for over a year. At the same time, SDL is using the concept of adaptive machine translation that Lilt introduced as the first CAT tool ever. The most important changes in Trados Studio 2017 therefore are not revolutionary on their own although mainly AdaptiveMT offers a great link between a traditional CAT tool and an emerging cloud technology. I expect MemoQ to follow this path soon.

To me, those features on their own do not form the considerable change that justifies an investment in Trados Studio 2017. If you are used to Trados Studio 2015 or 2014 and do not make use of machine translation, you certainly might want to wait a moment to upgrade your licence. Setting the autosuggestion features and using an AutoSuggest dictionary can offer much of the same improvements that upLIFT Fragment Recall is offering. If you are using MemoQ as your main CAT tool Trados Studio 2017 can offer an advantage with AdaptiveMT, but that only pays off if you are using machine translation technology. 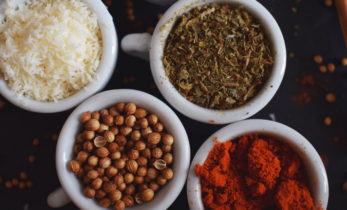